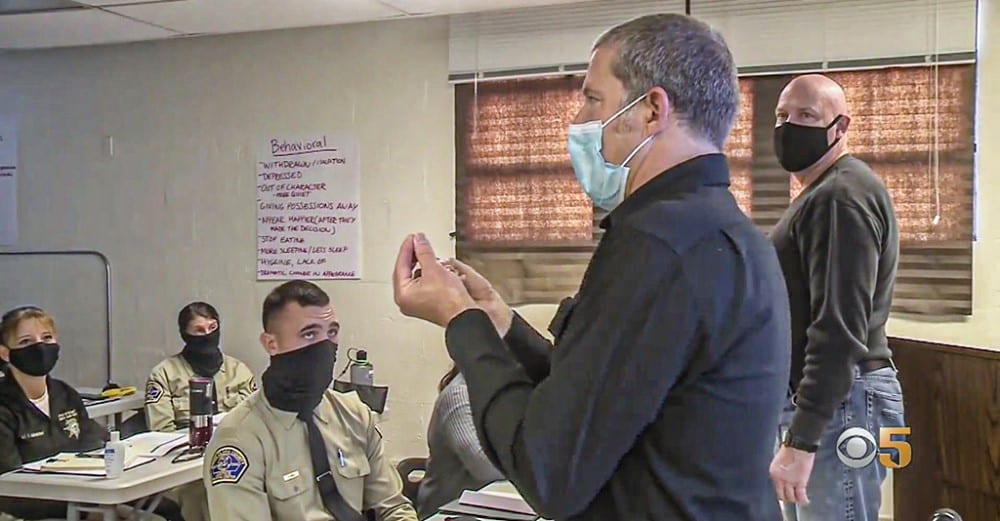 Their teacher is Brad Boardman, executive director of the Morgan Autism Center, a school and day program for children and adults on the autism spectrum.

“Having an understanding of what autism is — what autism looks like and challenges associated with autism — will help them get through those interactions in a positive way,” Boardman said.

The sheriff’s department voluntarily added the autism workshop 15 years ago as an academy requirement. All deputies — more than 1,150 of them — will have taken the course by early 2021.

Sheriff’s deputy Matthew Clark says officers’ chances of encountering someone with autism are greater than ever.

“Ten years ago, where one in 65 births were somewhere on the spectrum, now it’s one in 50,” Clark said.

According to the Autism Society, one in five young people on the autism spectrum will have some kind of contact with police before they turn 21.

Using the video “My Autism and Me,” Boardman explained that some on the spectrum can go to school or work but others may not speak or be able to take care of themselves. Often, they may not follow non-spoken social rules like the concept of allowing personal space.

That can lead to miscues or misunderstandings.

“Because of the training, it now clicks in your head: ‘possibly this is someone who’s on the spectrum,’” Clark explained.

Before the pandemic, Boardman had officers visit the Morgan Autism Center to foster in-person connections and cooperation.

Deputy Rick Chaeff says the training prepares him to recognize and react to unpredictable behavior.

“Just because someone’s behaving a certain way doesn’t necessarily mean they’re under the influence, that they want to fight you or anything like that,” Chaeff said.

Deputies learn that time, space and distance can help.

“So I need to be more patient. I need to slow things down. I need to make sure the person understands the questions I’m asking them,” Clark said.

“Once the situation is not violent and once you’ve contained it a little bit then you have to expect to take a very long time to get to the bottom of what’s really going on,” Chaeff added.

In the end deputies hope that what they’ve learned in class will lead to peaceful contacts on the streets.