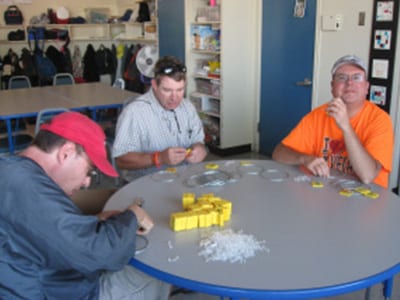 Morgan Autism Center adult clients Brian H., John F. and Jeff J. work on assembling “T-35 Ring Tags” for Ratermann Manufacturing, Inc. They are just a few people the company pays on a regular basis for their work, since the partnership was formed in 1989 between the company and nonprofit organization.

People diagnosed as “on the spectrum” are suddenly in demand by employers including computer software company SAP and home financing firm Freddie Mac. But Livermore-based Ratermann Manufacturing, Inc. is decades ahead of the curve — employing adult clients from Morgan Autism Center to its workforce since 1989.
It was then that George Ratermann, president of the company, was living next to Morgan Autism Center client Johann (“John”) F. who was about 20 years old.

“I was talking to his mother … and I said, ‘We have this product, and it might be something John could put together himself,’” Ratermann recalls of how the partnership began. “I just saw my next door neighbor and … I thought it was pretty hard for him to get a job otherwise. It really was quite that simple of a thought.”

But John’s mom thought more people could benefit from the opportunity to assemble custom imprinted “T-35 Ring Tags,” marked “EMPTY” on one side and “FULL” on the other.  The rings are slipped around the neck of cylinders to identify whether they need refilling, while also advertising companies.

“One thing that’s really cool is we actually pay checks for these guys,” George says.  “…We took a realistic average, which was probably below what someone on the assembly line could do, and made it a per piece price.” Over the years, upward of 13 adults and an average of eight to nine adults have participated in the assembly line activity at Morgan Autism Center.

“I’ve been doing rings for 20-plus years and I’m the one that got the job started!” John F. proudly states. “I can do the metal clips and there are only a few people who can do that.”

The job has also evolved since its start.

It began with George’s wife stopping by the school and dropping off the necessary materials for clients to assemble at which point they would turn around and return them to Ratermann, who completed orders and shipped them to the customers.

“Now they receive it, they assemble it, they package it and they ship it directly,” George explains of the changes implemented 10 years ago.

The activity allows clients to work as little as 15 minutes or as much as a couple hours.

“We have some very large orders that you guys do that is usually 20 to 30 orders a month,” George says. “The very custom orders are probably 10 to 20 batches a month.”

Participating clients share their thoughts about having the opportunity to work for Ratermann. “The ring job makes me feel like I’m reaching out to businesses and people and showing them what I can do,” Jeff J. says.

“I really like doing the job and getting paid and George Ratterman,” she says.

George says the work goes beyond what is accomplished for Ratermann, and more about the relationships forged along the way.

“The whole purpose is so people feel empowerment and feel productive,” George concludes. “There is a pride in ownership and in receiving a paycheck.”